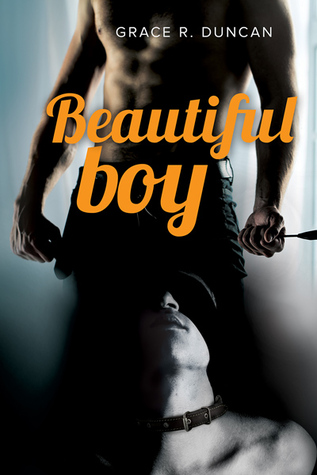 Malcolm Tate hung up his flogger when his submissive sought out another Dom and landed in the hands of a serial killer. Convinced his lack of dominance sent his sub away, Mal has spent two years blaming himself for what happened. But when his best friend finally convinces him to go back to the local dungeon, Mal’s grateful. Especially when he wins beautiful, submissive, firmly closeted Kyle Bingham in a charity slave auction.

College grad Kyle hasn’t earned enough to move out of the loft his conservative, homophobic parents bought, much less to buy any of the other things still in their name. When he’s won at auction by the hot, amazing Mal, he’s shocked that anyone would want him. No one else seemed to—not his parents, his former Doms, or any of his disastrous dates.

But Mal does want him and Kyle lets his guard down, only to be outed to his parents. With his world crashing down, he must find a way to trust Mal—and their developing relationship—or risk losing everything.

Beautiful boy is well written, beautiful, engaging, and well… what can I say that won’t just be a plot rehash or give the good bits away? Truly, it’s a beautiful story of second chances, personal growth, finding that person that is perfect for you—not that the person is perfect, neither man is! They are simply perfect for the other.

In this story, Grace begins with two men who are lost. One to the pain of the past and the other to the fear his cold family uses to control him. She also explores S and M more than she has in her previous works, but in a positive way, no worries. It was wonderful to watch as each man grew and awakened to the needs of the other and themselves.

I chuckled and stood, trying to decide what I wanted to do. It was so crowded, I wasn’t sure I’d find anyone to play with, even if I wanted to. I looked around but saw mostly straight couples sitting together.

Sammy pulled on me and I turned to her. “The dungeon isn’t as full,” she said, accurately reading my expression. “And the slave auction is starting in a few. You might want to go check it out. The slaves up for auction are in cages in the event area.”

“Okay. Are you guys coming in?”

“We’ll watch the auction, then probably look for a place to play.” She patted my hand and waved at the door. “Go! Find a pretty little twink to torture.”

I rolled my eyes, laughing at her word choice. It killed me just how much she knew about gay culture. Not for the first time, I wondered what she read on that Kindle of hers. I patted Cam’s head and turned to make my way through the crowd.

I didn’t usually go for twinks. There was a reason Blake and I spent plenty of time fucking. Something about having a big guy submit to me got my blood going.

Somehow I didn’t think there’d be a lot of big gay submissives up for auction tonight.

The change from the social area to the dungeon was almost jarring. Where the social room was loud, crowded, and warm, the dungeon was quiet, open, and cool. It was divided into two sections. The farthest section contained the play areas. The closer section—the one I stopped in—was for events, painted dark red and with a huge oriental rug on the
floor. One end held a low, small stage usually for demos, and the rest was normally empty.

Tonight, a guy in a suit was already on the stage, fussing with a microphone. To my left, a row of cages—taller than normal dog cages, but not by much—lined the wall. I counted six in all, all filled. On top of each cage, there was a card and, inside, a mostly naked person.

I stepped up to the first and looked at the card before turning my attention to the cage occupant. The man inside was older than me by a good twenty years. His hair was silver, and he wore a thong, a wide leather collar, and nothing else. He sat with his legs crossed and head down. While he wasn’t bad-looking, I didn’t usually go for that much older than me. I was slightly relieved when his card listed, along with a number of activities, a preference for women.

The next three cages held women, so I skipped those. Woman bits never interested me in the least. I liked my lovers with their genitalia on the outside.

The fifth cage made me stop. Smaller and a bit younger than I’d ever played with, he knelt, head bowed, hands clasped behind the small of his back. It was difficult to tell with him in that position, but I’d have guessed he was still plenty tall. His chest had lean muscle and his abs were tight, if not overly defined, which was what I liked. His legs had more muscles. I pegged him as a runner or swimmer. Soft brown hair hung over his face, and he wore nothing but a tiny black leather jock. He had rings in both nipples, and I could clearly see the outline of a PA in his dick, which looked quite substantial for his size, even flaccid.

On his card he’d listed service, impact, sensation, wax, and fire play as options, though what really caught my eye was in parentheses at the end: “Other options available within hard limits.” I was impressed that he was willing to enforce his limits. It listed his age as twenty-three. Eight years difference wasn’t that bad, not that it mattered for just a play session. But what really got me was the next line: “Preference: male Dominant.”

I squatted in front of his cage. “Boy, look up at me.” I put every bit of Dom I had into my voice.

He lifted his head immediately, and a shiver went through him. His gaze never went above my neck, and the show of submission called to every Dominant cell in my body. I wanted him. It was that fast and that simple, and it rocked me more than a bit.

It also let me know I did, in fact, know how to recognize submission. Maybe I’d just been blinded all those years by my knowledge of Blake. Maybe he’d been good at pretending. I didn’t know, but this boy looked a lot more honest, somehow. I pushed the worry off for later and considered him.

One look at him left me a little breathless. His round face had full cheeks, a tiny chin, and an almost button nose. He put me in mind of an elf or fae creature. I probably wouldn’t have been surprised if he’d had pointy ears. His green eyes filled his face, and his mouth… dear God, it was a mouth made for sucking cock. Full pink lips that I could tell he was struggling to keep from biting.

“Why do you prefer men, boy?” It was entirely possible he wanted to simply avoid sex, and I didn’t want misunderstandings. If it was just for that, I’d certainly play with him… then go home and jack off until I was sore. But I wanted it clear before we went into anything, and I could admit I was hoping that wasn’t the reason. Of course, I was assuming I’d win the auction, which I was pretty sure I could guarantee.

While I might not be called “wealthy,” I did more than all right for myself. My tech security firm had paid off my modest house early and made sure I had a good car at all times. I never had to worry about the lights getting shut off in the winter, like I had growing up. It had also allowed me to build up a tidy savings account, should anything go wrong.

I could afford to win this boy.

He blushed, and the color on his cheeks went straight to my dick. He swallowed and bit his lip. “I prefer men, Sir, because I’m….” He glanced up at me so quickly I’d have missed it if I wasn’t watching his green eyes. “I’m gay,” he finished softly.

Gay. Oh fuck, this boy was going to kill me. “In the closet?” I asked, taking the harshness out of my voice for the moment.

He nodded. “Yes, Sir. My family would disown me.”

I winced. My parents hadn’t understood, exactly, but they tried their best. I couldn’t imagine losing them over my orientation.

I wanted to ask more, but just then the guy on the stage tapped the microphone, and I realized the room had filled in around me while I was eyeing my boy.

That thought brought me up short. My boy. I shook my head at myself. I’d never actually collared Blake—we had one he wore for scenes, but it came off when it was over. I didn’t think of him as mine. That I had with this boy kind of threw me off.

I turned my attention to the emcee and listened to the rules. Every winner would sign a contract, promising to abide by hard limits and to keep the scenes “safe, sane, and consensual,” or at least within the realm of “risk-aware consensual kink.” He explained about payment, pointing to a lady at a table by the stage, then announced the first slave.

One of the Doms who helped run the dungeon stopped at the cage next to my boy’s. He released the girl and led her onto the stage. I didn’t pay much attention, except to listen to how high the bidding went. She topped off at five hundred, but I suspected that was because she was only the first of the night.

I stepped to the side when they led her off stage and then they came over to my boy’s cage. The Dom unlocked it and my boy crawled out. When he stood, he immediately set his feet shoulder width, straightened his back, and clasped his hands behind him at his waist. He glanced my direction briefly, then lowered his gaze to the floor. My cock twitched again.

I was thrilled to see he came up to just under my chin. I wasn’t the tallest man in the world, but I still had a respectable few inches on the topside of six feet. This made him just slightly smaller than me overall, and two years ago, I’d have laughed at someone suggesting I’d want a boy like this.

In that moment, however, I couldn’t imagine wanting anything else.

Something in those deep green eyes called to me, made my cock stand at attention and my stomach jump in a good way. His pale skin just begged me to leave lovely welts and pretty purple bruises on it. Those nipples were made to be tormented, the rings pulled on.

Oh yeah, he was mine. And I started to realize I was thinking far beyond winning the auction. Somehow, though it probably should, that thought didn’t bother me one bit. 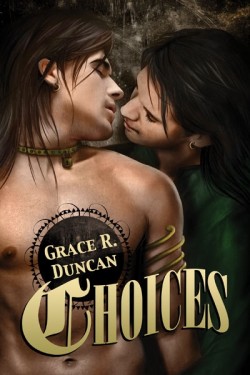 Grace Duncan grew up with a wild imagination. She told stories from an early age – many of which got her into trouble. Eventually, she learned to channel that imagination into less troublesome areas, including fanfiction, which is what has led her to writing male/male erotica.

A gypsy in her own right, Grace has lived all over the United States. She has currently set up camp in East Texas with her husband and children – both the human and furry kind. As one of those rare creatures who loves research, Grace can get lost for hours on the internet, reading up on any number of strange and different topics. She can also be found writing fanfiction, reading fantasy, crime, suspense, romance and other erotica or even dabbling in art.