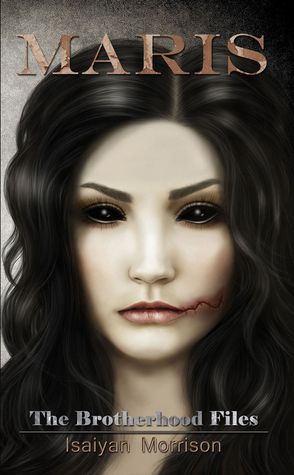 Title: Maris
Author: Isaiyan Morrison
Series: The Brotherhood Files (This book can be read on its own however, it is part of The Deamhan Chronicles.)
Genre: Paranormal
Publisher: Self Published
Release Date: Mar 10, 2015
Edition/Formats Available In: eBook & Print
Add To Goodreads
Book Links: Amazon Kindle | Amazon Print

She gave me her blood, and my life changed forever.

Anastasia. My sire. The only influential figure in my already-fragile life. She did this to me. She caused all the pain and suffering. There was a time I believed I owed her everything. After all, she gave me immortality and the never-ending thirst for the energy contained in the blood of my victims.

But now vampires hunt me and the humans want to use me as their personal weapon. They believe I’m some kind of apotropaic figurine that can damn all Deamhan and force us back into hell where we belong. Me? I just want to live. I just want to be Maris. That way, the only one I can damn is myself. 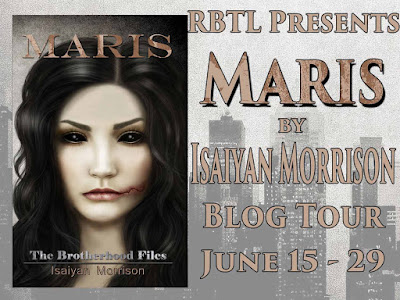 I knew my name, Maris, and that my mother worked as a prostitute in a famous brothel located in the Irish slums just outside of London, but I didn’t how I ended up in this unknown location.

Every thought about my mother started off the same. She tried to abort her pregnancy because it interfered with her ‘job.’ After my birth she kept me locked up in the corner of the room in the solid brass baby cradle that one of her clients gave her as payment. She tended to me as least as she could and when I was old enough to walk and understand what exactly was going on, she locked me inside her closet where I remained until sunrise.

With her death from cholera a year ago, I found myself forced to earn my way. I had only two options: follow in her footsteps or leave the whorehouse to fend for myself. I pissed myself at the thought of trying to survive out there; in the world, all alone. At least I knew that I would have two hot meals, my mother’s old ragged bed, and a room of my own if I stayed.

I made a promise to myself. I would take over my mother’s client list. I would stay as long as I had to. I would save up as much money as I could and eventually leave for greener pastures. I struggled, though, as the years passed. Some of her clients enjoyed me while others couldn’t handle the fact that I, a post-puberty teenager, would submit myself to that line of work. But I did and there were nights that I wished I hadn’t. I had reached the midpoint of my savings goal when my life changed forever. I was almost there. I almost made it.

One night three large men with sharp teeth stormed into my room. I didn’t know who they were or what they wanted with me. One of them grabbed me by the shoulders and pushed me violently against the wall, demanding that I tell him my name. When I answered his question with a question of my own, he smacked me, slicing the left side of my face. That was when things began to go from scary to downright crazy. He placed his mouth over my opened flesh and began to suck the blood from my wound. That was the last thing I remembered before I blacked out and awoke to three individuals—two females and one male—standing over me.

Isaiyan Morrison was born and raised in Minnesota. She moved to San Diego, California while in the Navy. After serving four years of active duty, she moved to Los Angeles. After a few years, she moved back to Minnesota where she started to pursue her dream to be an author. Maris is the first novel in The Brotherhood Files and the fourth book which takes place in the Deamhan Universe. She now resides in Texas with her two cats, three pit bull dogs, and four guinea pigs.