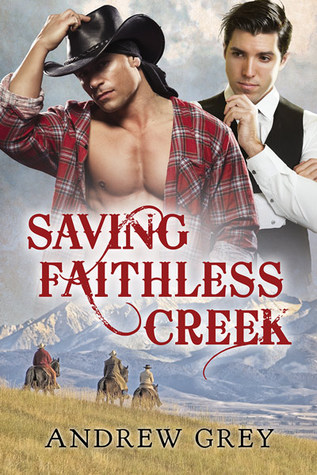 Blair Montague is sent to Newton, Montana, to purchase a ranch and some land for his father. It’s a trip he doesn’t want to make. But his father paid for his college education in exchange for Blair working for him in his casinos, so Blair has no choice. When he finds out he’ll be dealing with Royal Masters, the man who bullied him in high school, he is shocked. Then Blair is surprised when he finds that Royal’s time in the Marines has changed him to the point where Blair could be attracted to him… if he’s willing to take that chance.

Royal’s life hasn’t been a bed of roses. He saw combat in the military that left him scarred, and not just on the outside. When he inherits his father’s ranch, he discovers his father wasn’t a good manager and the ranch is in trouble. The sale of land would put them back on good footing, but he is suspicious of Blair’s father’s motives, and with good reason. The attraction between them is hard for either to ignore, but it could all evaporate once the land deal is sealed.

This is a story of overcoming bullying and of seeing past the façade to find the true, vicious bully while also seeing the heart of the loving, yet fearful ex-bully. We’ve all heard the axiom, a cheater cheats, or something along those lines. Well, most of us believe that about bullies too. As someone that knows for a fact that most of the bullies that hurt me are still just as hateful and hurtful as always, reading Saving Faithless Creek was a wonderful read.

I know that there are many bullies out there that are not truly wanting cause the harm they do. They act out because of fear, abuse, desperation, etc. Sometimes they are even more afraid than those they hurt, frighteningly enough. That was the case for Royal. He made Blair’s life hell, to the point his mother moved him away from there to protect her son.

But Blair’s all grown up and his snake of a father has sent him back to the place he never wants to go, to deal with a man he wishes never to have to see again. Buying one ranch and part of another shouldn’t be too hard since the owners had shown interest already. Right? Well… things don’t go quite as planned.

Saving Faithless Creek is Grey at his best! He took from his own teen years and then added in what makes Andrew Grey HEAs so powerful. The characters are deep and multifaceted. The story is, just, WOW – on so many levels. The sex is H O T. I love how he took reality, but twisted it to make the bully redeemable… well, one of the bullies, at least. The secondary characters are delightful and truly add to the story (hey, Andrew… any chance of Todd getting his HEA?). This is a true must read, especially if you were the one that was pushed into the lockers or bullied in any way as a teen.

“I have a case of the good beer in the refrigerator, and we can order a pizza and veg.”

“Or we could do a project together,” Blair offered. That must have triggered Todd’s imagination because he was already hurrying across the room. “I see you like that.”

“Duh,” Todd said. “What did you have in mind?” He rummaged in the corner
and came up with two guns. “How about paintball? We can set up canvases outside once the sun starts to set. There’s enough light from the parking lot lights that we can see to shoot. The colors are primary, so there isn’t any subtlety.”

“Exactly, and if you want, I could draw a sketch of your father on one of the canvases.”

“That’s it.” Blair picked up one of the canvases. “How about an ‘it gets better’ piece?” Blair closed his eyes. “We both had trouble with bullies in school. So let’s do portraits of them and then shoot the paintballs at them. It can be an anti-bullying statement.” Blair chuckled. “And it would make me feel a hell of a lot better.” Especially if he was heading back to Newton.

“All right. Doing a full portrait will take time.”

“I’m thinking if we make the image ghostly….”

“You do whatever you want with your image, that’s the cool thing. My bully is different from yours and carries a very different feeling. Yours pushed you into lockers, while mine befriended me and then once he could tell I was gay, he spread it all over the school and made my life a living hell. He was supposed to be my friend, and sometimes when we weren’t in school he’d be nice to me, but then as soon as other kids were around, he’d turn nasty again.” Todd set up two work surfaces and then hurried away to the kitchen area, returning shortly with a couple of beers and some snacks. “I have tons of supplies, so do whatever you want with your portrait.”

Blair settled in one of Todd’s chairs. He wasn’t planning to paint, so he didn’t feel it necessary to change his clothes. Todd had put the paintball guns away, so the shooting would have to wait for a while until they were done. “You need to have this done before you get back from Montana. That way we can have a shooting party in a few weeks.”

They worked quietly for an hour. Blair leaned over to see what Todd was doing. His drawing was slightly stylized to make the person seem mean, dark, and cruel. The face itself was normal enough, but the mouth and eyes were chilling. There was no doubt that this person had hurt Todd deeply, the pain evident in every line. Blair’s image wasn’t as blatant, but then he hadn’t thought about this man in quite a while.

“I love the menace in his eyes. Who is he?” Todd asked.

Andrew’s hobbies include collecting antiques, gardening, and leaving his dirty dishes anywhere but in the sink (particularly when writing) He considers himself blessed with an accepting family, fantastic friends, and the world’s most supportive and loving partner. Andrew currently lives in beautiful, historic Carlisle, Pennsylvania.