Where were you born and where do you call home?

I was actually born in Nashville, Tennessee. I spent a good deal of time there as a teenager, as well. Home? Well, that’s a different story. I’m a bit of a wanderer. Right now, I’m hanging out in East Texas, but I hope someday to call the Pacific Northwest or Pittsburgh home again.

What is the name of your most recent book and if you had to sum it up in 30 or less words, what would you say?

My latest title is The Geek and His Artist and summed up in 30 words or less is: Brevity is not my strong suit. Seriously, this story started out as a short story, aimed at under 10k. As I was writing it, I got nervous as I approached 8, bit my nails at 10k and saw 12k sail by with no end in sight. I gave up and set it aside. That’s when Blue Eyes was written. And Geek got the full page time it needed.

What does your protagonist think about you? Would he or she want to hang out with you, the author?

I think Simon and Jimmy would both like me. Jimmy would be a lot more comfortable than Simon would, only because I’m very outwardly affectionate and welcoming. I’m a lot like Jimmy’s mom, in fact. So, Simon would probably like me but I’d take some getting used to, for him.

Which character speaks the loudest, to you? Do any of them clamor to be heard over the others?

Geek was originally supposed to be Jimmy’s story. While it still certainly tells Jimmy’s side of things, it didn’t take long for me to see Simon had the bigger struggle. He definitely needed to be heard more than Jimmy did.

How did you come up with the title?

Titling is the bane of my existence. I struggle every time with it. The Geek and His Artist started out as just a placeholder title, but the further I got, the more it fit.

Is there a message in your novel that you want readers to grasp?

Fear is such a big part of the lives of so many young people. It’s a sad thing to consider, and for LGBTQ youth, it’s even more prevalent, not just from bullies, but from their own parents. What I’d love a reader to see is that fear is valid—it’s all right to be afraid—but it’s something that you can get past and there’s so much out there beyond the fear.

Do you have plans for a new book?   Is this book part of a series?

Well, I have series-itis. I’m terrible for this, but Sean and Kip have poked me quite a bit and I think I might end up writing their story yet, too.

What can we expect from you in the future?  i.e. More books of the same genre? Books of a different genre?

I love to explore different genres. I have a particular fondness for dystopian and hope to write something there, as well.

Coffee, all the way. I don’t think I’d still be even remotely human without my cup (or three) each day!

Laptop or desktop for writing?

I have a desktop I use most often. I’m a gamer, so it’s also built for gaming. I have a laptop, as well, for when I need a change of scenery while I’m writing.

Thanks for stopping by! Be sure to follow the rest of the tour for chances to win a paperback copy of Geek and $25 to spend at Harmony Ink! Each comment below also qualifies you for an entry to the giveaway. One reader today will win a Geek character trading card of your choice! 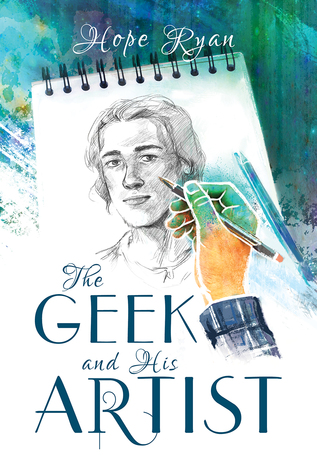 Simon Williams spends his lunch periods drawing his geek and trying not to think about the terrors waiting for him at home. He needs to get away from his abusive father before he suffers the same grisly fate as his mother. Because he’s learned the hard way running away doesn’t work, he’s counting the days until his eighteenth birthday.

Jimmy Bennet should be spending his lunch studying so his senior GPA is good enough to get him into college, but he can’t seem to focus thanks to his distracting artist. When he’s given the opportunity to tutor Simon in Trig and discovers Simon’s home-life nightmare, he wants nothing more than to get Simon out of danger. This need becomes more urgent when Simon comes to school the Monday after their first date with bruises, but it takes a broken leg before Jimmy can convince his boyfriend the Bennets really want him.

But the danger Simon thought was past shows up at the most unexpected time, and he must stand up to the fears he’s held so long to protect not only himself, but the man he wants to spend his life with.

You can get Geek here:

Add Geek to your TBR Pile

Hope Ryan is an out and proud bisexual, wife of a loving guy and mother to three, including an amazingly brave gender fluid son. She loves to write about the tough stuff, but also wants to see her characters happy in the end. She feels strongly about showing there is hope for everyone, no matter where you come from, how you identify your gender or who you love.

Hope likes to play board and card games and can often be found playing God with her Sims or running around, fighting monsters in a virtual version of Middle Earth. Her TV and movie preferences lean towards anime, sci fi and fantasy, though she’ll never turn down a good happily ever after love story, either. As long as there are explosions or action, she’s happy. She loves to read books of all kinds, though prefers stories about love in its many forms.

2 Replies to “#Interview w/ Hope Ryan, Author of THE GEEK AND HIS ARTIST”